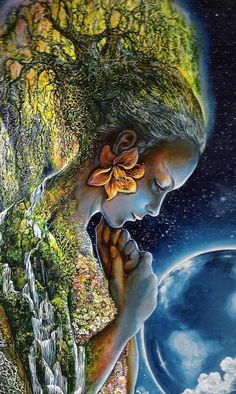 This mother’s day weekend is a beautiful time to acknowledge all the mothers, grandmothers, aunts, sisters and the feminine traits in all things – in women, men, plants, animals and the natural forces.

To nurture and sustain – Mother Nature is a personified form of a creative controlling force respected in spirituality and all faiths.

Discussions and even television series have frequently shown us that when it comes to human kind vs nature – nature always wins. Be it wind, fire, water or earth!
Outsmarting Mother Nature seems to be evading the thinking and actions of  “modern” society.

What if puny human kind learned to understand and work with the Grande Mother, then we would win too. Win win!

Today appreciating the natural forces behind immunity and health has never been so significant.

There are numerous examples where observation of natural processes lead to interesting discoveries.

Mold growing on a plant indicates the poor resilience and overall health of the plant.

Mold growing in a laboratory dish of bacteria was noted to inhibit the bacterial growth.
This initiated research and the discovery of penicillin, the evolution of germ theory, pasteurization and thus the frame work of modern medicine: ongoing development of antibiotics, vaccines, sterilizing, chemical sanitization etc.

The point being, all the focus was on eliminating the pathogen, germ or “bug”.

This mindset excluded the terrain or environment to which the pathogen is introduced.

It excludes nutrition, sleep, good circulation and happy disposition as also having impact on overall health by their influence on the terrain.

Of course, we know these are important, and we are recognizing more and more how the germ theory alone has limitations. The development of super bugs and resistance to antibiotics is clearly showing how Mother Nature responds with adaptation and mutation.

Millions of dollars are now being poured into studying the microbiome (part of our terrain) – and reveals bacteria and viruses have various roles to play in our natural health.

Bacteria Viruses and Molds:
Digest
Compost
Intervene
Keep other microbes in check
And most likely an undiscovered list.

Supporting balance, through appreciating the terrain or the environment of the entire person needs to be respected and studied. This is wholistic and very motherly thinking!

Why do two people with similar exposure to a certain pathogen have different symptoms – one being very mild the other critically ill or laid up for weeks?
This is commonly seen even within the same household.

Pathogens are real and create ill health there is no doubt.

Our current common understanding and classification of pathogens is interesting.
Read further for an overview/introduction here.

Strict pathogens- exposure to these microbes will create consistent predictable symptoms – examples are malaria, HIV, syphyllis – these have the potential to mutate and become resistant due to our manipulation in the environment and our manmade methods of treatment.

Opportunistic pathogens – the severity of infection will be determined by your susceptibility to infection, concomitant health issues and lack of capacity to recover – examples are strep throat, ear infections, travelers diarrhea. Also influenced by the terrain of the individual, environment and repetitive treatment methods.

Is the current pandemic due to a strict or opportunistic pathogen?
This is yet to be determined.

The solution relies in understanding and implementing natural forces to balance the terrain AND address the pathogen.

Indigenous peoples have demonstrated that their long term survival on Mother Gaia Mother Earth required them to embrace what they understood through observation and by respecting cycles they knew they could not control.

From the macro signs of finding shelter to the micro signs of hidden water sources and plants to bring about healing, their nomadic lifestyles avoided the consequences of overharvesting and polluting.

The Aborigines in Australia are proud to state their harmonious relationship with Grande Mother Earth for over 50,000 years!
Being in harmony with nature meant survival.

Mother is both a noun and a verb. Let’s appreciate all things mother.